Hopefully you have a great big smile on your face, because today is a perfect day to be happy! Wubbzy wants to make extra certain that everyone has a little bit of happiness in their day today. While reminding yourself to be happy, why not also think about spreading some happiness to someone else’s day! There are plenty of ways for you and your kids to make each other happy every single day. If you are short of ideas, Wubbzy found a great collection of things you can do to brighten someone’s day!

Wubbzy knows lots of ways to bring a little happiness to someone’s day, but the way he knows best is with some singing and dancing! Wubbzy loves to spread his happiness to others through  song and dance because he gets to provide entertainment for others while having fun himself!

In Wubbzy’s interactive storybook app adventure, “Wubbzy Loves You,” Wubbzy has a chance to see just how much happiness you can spread to others with a little bit of kindness.  Daizy and Wubbzy have a blast delivering friendship lovey love cards all around Wuzzleburg! Just receiving a lovey note from a friend makes everyone so very happy! Why not take some time to remind yourself about the little ways that you can bring someone else a little bit of joy? Try complimenting a friend’s outfit, offering to help with errands, or volunteering to cook the family dinner. No matter what you decide to do, someone else will certainly appreciate your effort to make them happy! 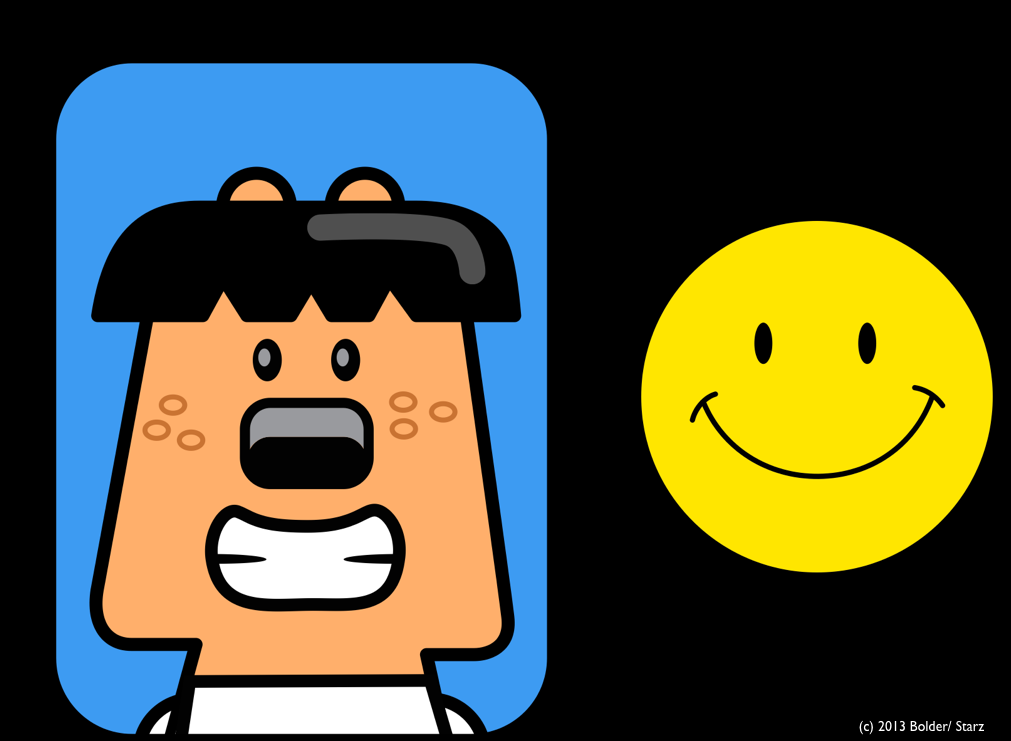 You don’t need a holiday or special occasion to do something nice for someone else. Wubbzy says that every day is a perfect day for putting a smile on someone else’s face! Get creative with how you bring a little joy into someone’s day today. Maybe if you are able to brighten someone’s day, someone else will surprise you by doing the same for you! Imagine how happy you would be! Wubbzy hopes that you can use his tips and suggestions to brighten the skies in someone’s day by making them happy!

In their newest adventure,  Wubbzy and Daizy are eager to celebrate Frienship Day! But leading up to the annual Friendship Day Parade, Wubbzy and Daizy have to journey around Wuzzleberg delivering friendship lovey love cards. What fun Wubbzy has meeting so many new friends and delivering happiness across Wuzzleberg! They spread heaps of cheer to make everyone feel like they have a friend! Have you ever had a friend do something oh so very nice for you for no reason at all like Wubbzy and Daizy did? Maybe a friend wrote you a nice note to wish you a great day or surprised you with a sweetie.  Maybe you did something extra kind for someone else that made them so very hap-happy! Wubbzy loves to show his friends how much they mean to him and thinks that you should show someone else kindness to brighten their day! One of Wubbzy’s favorite stories is of an NYPD officer who helps a man on the street by buying him a pair of shoes for no reason at all. There are lots of different ways that you can show someone special that you carey-care about them.

Wubbzy thinks that being a great friend means being supportive, happy, and most importantly, kind! Wubbzy wants to make sure that you have plenty of ideas for spreading your kindness to others today, so he’s picked out his favorite ideas from a list of Kindness Ideas from the Random Acts of Kindness Foundation! Here are Wubbzy’s top picks for ways that you can spread kindness to all of your friends:

- Help a friend fix something

- Let a pal cut you in line

- Introduce two of your friends to each other

- Give a friend a hug

- Help a classmate with their homework

Wubbzy’s fun new adventure, “Wubbzy Loves You,” reminds us all that you don’t always have to have a reason to do something nice for someone else. Sometimes, the thing that makes you happiest is when a friend surprises you (like sending you a friendship lovey love card!) and makes you feel extra special! What are you going to go do today to brighten someone’s day and show a friend how much they mean to you? If you do something nice for a friend to celebrate Friendship Day like Wubbzy and Daizy, maybe a friend will do something special for you!

Have you ever wished you could fly? Maybe you wanted invisibility, super-strength, or super-speed?  Everyone has wished to be a superhero at some point in time. How fantastic would it be to spend your day flying around and coming to the rescue of people in need? Burning buildings, cats stuck in trees, bank robberies – you’d be there to save the day! In his latest adventure Wubbzy and his pal Daizy get their shot at playing superheroes! What a blasty blast Wubbzy and Daizy had coming to the rescue all around Wuzzleburg! Among other helpful deeds, Wubbzy and Daizy the dynamic duo, rescue a poodle in a tree, find the lost key to Wuzzleburg, and more on their madcap adventure! Read and play on your smartphone or tablet as Wubbzy and Daizy save the day in Wubbzy’s new interactive storybook app, “Wubbzy the Superhero!” With fun interactions, three reading modes, and a kooky new arcade game you can’t help but feel like part of the superhero fun!

Even if we all can’t go on a superhero adventure like Wubbzy and Daizy, we can certainly do our best to pretend! With just a little bit of an imagination, a couple of necessary props, and some good deeds to be done, we can all become superheroes like Wubbzy and Daizy in our imaginations! Wubbzy thinks that sounds like the perfect way to bring your superhero façade to life! If you need some extra superhero inspiration, check out a classic superhero movie that will have you ready to save the world in no time! 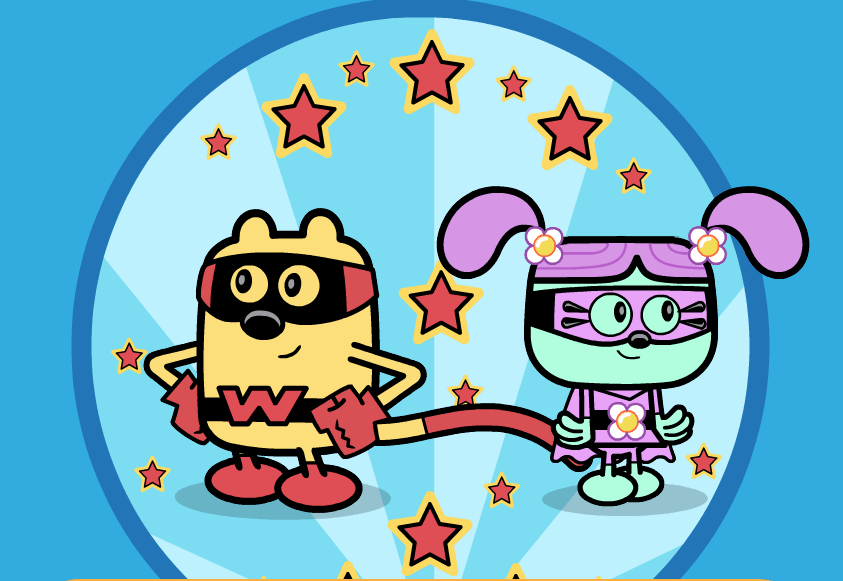 To really transform into a superhero, Wubbzy wants to make sure that you have all of the superhero essentials. After all, would you ever catch Spiderman without his webs or Batman without the Bat-mobile? Of course not! Then how would they save the world? Wubbzy and Daizy know that the ultimate hallmark of a superhero is, of course, a cape! A cape helps a superhero navigate as he flies through the skies and distinguishes a superhero from non-super people. Wubbzy wants to make sure you have the perfect superhero gear, so Wubbzy passed along his tips for making the perfect superhero cape! With the help of an adult, put this cape together, throw it on, and go for a run! Wubbzy’s sure that with a cape on, you’ll feel like you’re flying around like a real superhero!

Wubbzy loves St. Patrick’s day! St. Patrick’s Day is an Irish holiday celebrated all around the globe to honor Saint Patrick, the patron saint of Ireland.

Wubbzy has been looking all over Wuzzleburg for clovers to celebrate this special holiday. In Ireland on St. Patrick’s Day, people traditionally wear a small bunch of shamrocks on their jackets or caps. Children wear orange, white and green badges, and women and girls wear green ribbons in their hair. Wubbzy has a green hat to wear on St. Patricks Day this year! 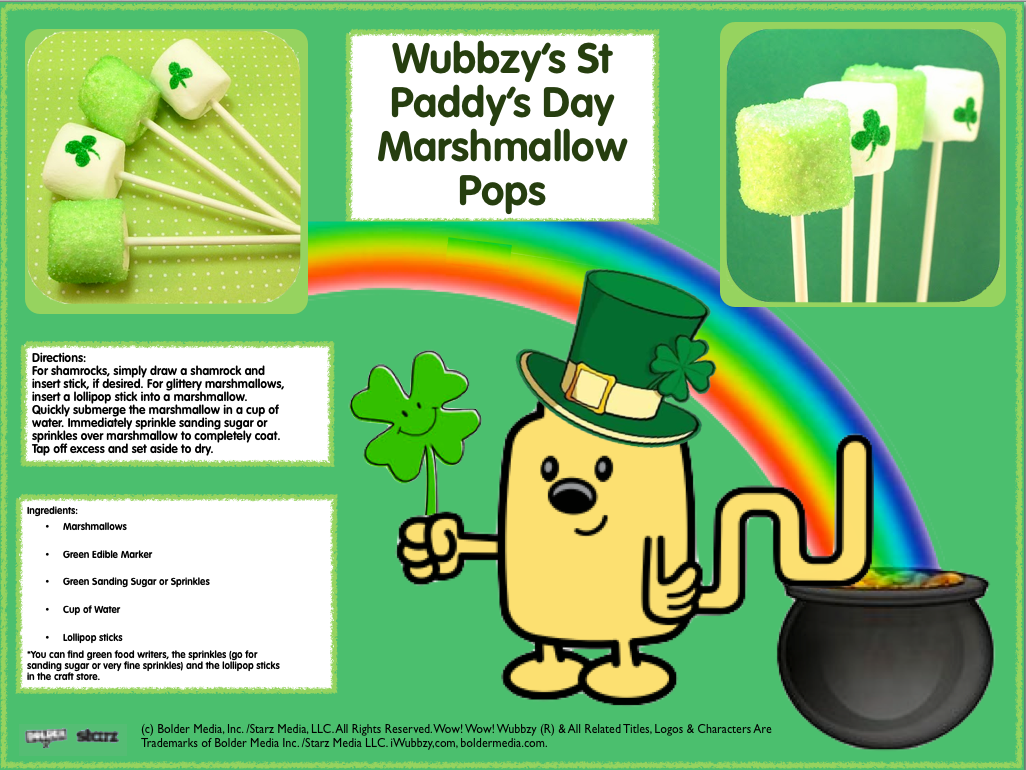 Check out another one of Wubbzy’s Favorite Parades, Wuzzleburg’s Friendship Day Parade, in Wubbzy’s cool new app “Wubbzy Loves You.”

Chugga chugga! Choo! Choo! Toot! Toot! The Wuzzleburg Express is approaching Wuzzleburg station! It’s so exciting to see the big shiny cars, hear the whistle, and feel the ground shake as the train pulls up. Wubbzy and his friends love to ride the train! In the new storybook app, “Wubbzy’s Train Adventure,” Wubbzy, Daizy, Walden and Widget board the Wuzzleburg Express destined for a Kooky Carnival. But,”Wow! Wow!,” are they in for a bumpy ride!  When the train breaks down, it is up to the Wuzzle-friends to save the day. How will the gang get the Wuzzleburg Express back on track?

This deluxe story experience has fun interactive features on every page, like moving trains, talking characters, a dunk tank, a rollercoaster and much, much more. “Wubbzy’s Train Adventure” is hours of fun for Wubbzy fans big and small. Check it out on iTunes, Amazon, Google Play or Barnes & Noble.

It rattley rattles, and rolls along,

The enginey engine is big and black.

Filled with goodies for girls and boys

The engineer waves, and Wubbzy waves back.

Wubbzy, Daizy and Widget count cars on the track. 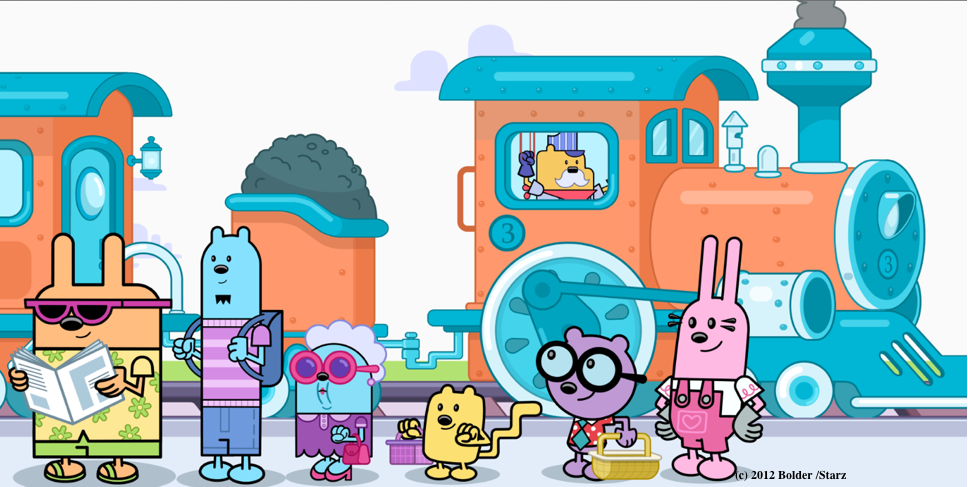 Can you tell us who Wubbzy is today? Wow! Wow! Everyone! Happy Friday! Let’s play a Wow! Wow! Wubbzy Game! We’re going to show you photos of our pal Wubbzy and his friends Widget, Walden, and Daizy around everywhere we possibly can! We’d like you to help too! If you have some Wubbtastic gear take a picture and share it with us. We’ll share it with all of Wuzzleburg to play Where’s Wow Wow Wubbzy?

Here’s the first picture! Get Ready Everybody! Send your answers to Winner@iWubbzy.com – One of our Wubbtastic Friends will get a special prize!

Wow! Wow! Wow! Everyone! We hope you’re having a Wubbtastic Wednesday! It’s always great to be playing together with your best friends. Wubbzy, Widget, and Walden know this better than most! In Wuzzleburg, everyone is friends with everyone! Here’s a great picture of our Wow! Wow! Friends together! Do you know where Wubbzy, Widget, and Walden are in the picture? Where do you go with your friends on special Wubbtastic days?

Wow Wow Wow Everyone! Have you met the Wubb Girls yet? They are the best band ever to visit Wuzzleburg! The Wubb Girls played a show and even got to play with Wow Wow Wubbzy! Wow Wow Everyone – It’s Wubbzy and Daizy! They were in the big city of New York to visit a special friend and traveled all the way from Wuzzleburg. That’s a very big trip for our friends to make, but Wubbzy and Daizy sang songs along the way making it a fun adventure! 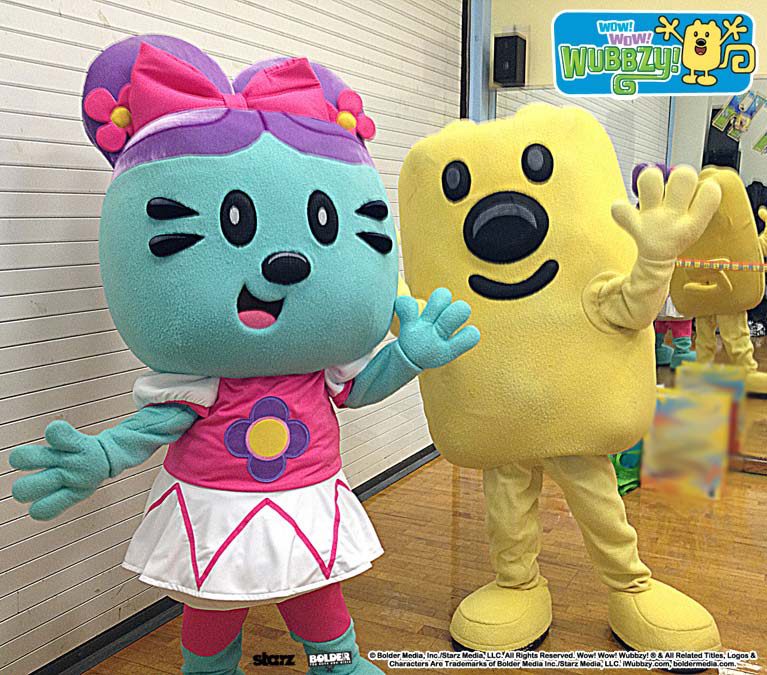 Don’t they look great together? They even look great as pirates! Tell us where you would like to see Wubbzy and Daizy pop up and we’ll see if we can get the Wubb Club to make a special visit!